Anaximander was born in Miletus in 610 B.C. He lived a long time at the time of Polícrates, who was a great tyrant in Samos during the years 538 to 522 B.C. He was a great Greek philosopher, geometrician and astronomer, disciple of Thales of Miletus, was also part of the school and he succeeded Thales when he could no longer represent, he was also Anaximenes' teacher. He was considered as the first scientist since he was in charge of using the experimental method through the demonstrative method. He discovered the obliquity of the ecliptic and also the plane of the celestial equator. He is considered to be the one who succeeded in introducing the sundial in Greece and is believed to be the creator and founder of cartography. His most important contribution has been his prose work related to the cosmos and the origins of life. He spoke of the sun, the moon and the stars, these being the innermost part.

Anaximander, a disciple of Thales of Miletus and a member of the Miletus school, was considered the first scientist in the world to use experimentation through the demonstrative method. He was a scientist who dedicated himself to searching the foundation of all things. Founder of cartography whose most important work was his prose related to the cosmos and the origins of life.

He devoted most of his life to find the primordial and basic element of all things, but he firmly thought that this element was not material, that it was of indefinite origin, so he decided to call it apeiron, and it was characterized by an eternal movement that had no end, which means that it never resembles anything, that it never gets old and that it encloses and governs everything around it. His thought theories were that the worlds were innumerable, that there was a cosmogony of its own, a single cosmology and then, the origin of man. He had the idea that the worlds were infinite, that they never ended and that when one reached the end, it was immediately succeeded by another and from this place heavens were born. He thought that the earth was always in a state of rest because it was unbalanced. He gave a mathematical basis to the world assuming it was ordered.

Anaximander postulated that opposites are united by means of the apeiron and that they separate when they need to form things leveled by domination cycles, for him, this was how the world was made, by separating the cold from the hot. He managed to observe empirically, a water lowering in several geographical areas and took his own ideas saying that the earth was getting dry, as a struggle between hot and dry versus wet and cold. It is very interesting to observe the way in which Anaximander succeeds in anticipating current events, especially when we refer to evolution theories. Today, Anaximander is considered to be the person who discovered the elliptic obliquity. But without a doubt, his most important contribution was the elaboration of the prose work related to the cosmos and the origins of life, in which he spoke about universe as concentric cylinders from which the outermost was the sun, the middle was the moon and the innermost was full of stars.

His Arché was the apeiron. He was referring to the indeterminate, what has no limit, which is precisely what we are looking for. The whole apeiron is eternal, it is always in continuous movement, and it was considered as something material, as the divine which gives origin to everything in the world. He also believed that the apeiron was the cause of the whole generation and was also responsible for all kinds of destruction. It was for this reason that Anaximander believed that the Arche should be indeterminate.

Among the main phrases that we can rescue from Anaximander we mention the following: Immortal and indestructible, it surrounds everything and destroys everything, water is the arché (principle) of the universe, the undefined is divine, because it is immortal and imperishable, nature is eternal and does not age, and one of the most important: The earth is cylindrical, three times as wide as its depth and only the top is inhabited. But the earth is isolated in space and the sky is a complete sphere in the center of which is, without any support, our cylinder, the earth, is located at the same distance from all points in the sky.

Among Anaximander’s outstanding works we can mention the measurement of the solstices and equinoxes. The distance and size of the stars, the determination principle of all reality and his philosophy book: his work was about Nature. 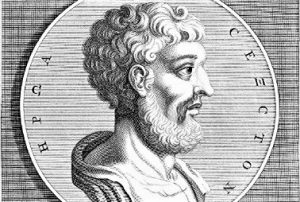