Almost all plants are capable of performing the process of photosynthesis, and this process is key to their survival as it allows them to make sugar molecules that serve as fuel and building materials. But plants can respond to light in other ways as well. These responses that are not related to photosynthesis allow plants to adapt to their environment and be able to improve their growth. 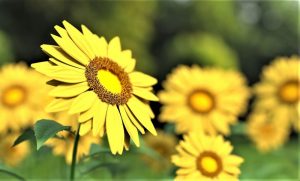 Phototropism is the process by which a plant moves naturally and organically to change its position in the direction of light, in response to the stimulation of the sun's rays.

Phototropism is a response to light in plants, which involves growth to or from a light source. This response allows the green parts of the plant to approach a source of light energy, which can then be used for photosynthesis.

In 1880, Charles Darwin and his son Francis, published an article in which they explained the inclination of grass towards light. Specifically, they examined this response in very young, newly sprouted plants whose leaves and shoots were still covered by a pod called coleoptile.

The process is considered to be a plant hormonal reaction that is used to encourage plant growth. We can then say that phototropism is the movement made by a plant in order to look for a source of light, in other words, it consists of changing the location or orientation of the plant to receive sun’s rays. It can also be considered as a chemical signal, because when some types of hormones are released into the plant system, the cells of the part that receives sunlight grow faster.

There are two important types of phototropism:

Auxins are a potent growth hormone naturally produced by plants. It is located at the buds and tips of the roots and promotes cell division, stem and root growth. They can also drastically affect plant orientation by promoting cell division to one side of the plant in response to sunlight and gravity.

One experiment that can be carried out in a simple way is using, for example, sunflower seeds or corn seeds. A cardboard box is needed, in which the plant will be placed. Make a hole in the box of about 2 inches and then close it with the plant inside. As the plant grows, you will be able to see how it looks for the opening that we have done before.

Some examples of phototropism are the following: