The Mohs scale is the approximate measure of the resistance of a smooth surface to scratching or abrasion, expressed in terms of a scale devised by the German mineralogist Friedrich Mohs, a German scientist and geologist in 1773 who devoted himself to studying chemistry, mathematics and physics. The scale of a mineral is determined by observing whether its surface is scratched by a substance of known or defined hardness. It then orders the hardness of the minerals according to their ability to be scratched and is arranged in ascending order, where the number one is catalogued as the softest mineral or talc and the number ten as the hardest diamond.

What is the Mohs scale?

Mohs scale is an empirical table that is used to determine the hardness of a mineral by making comparisons with others that are considered as patterns. It has 10 different reference minerals and the hardness is determined by making scratch samples.

About the Mohs scale

To give numerical values to the physical property of minerals, they are classified along the Mohs scale, which is composed of 10 minerals that have been given arbitrary hardness values. The minerals contained in the scale are shown in the table; while at the same time other materials are shown that approximate the hardness of some of the minerals.

During the determination procedure, it is necessary to be sure that the scratch that has been made is really well done and marked, and that it is not just a small mark that will be easily erased. If the species being tested is fine-grained, the test can only loosen the grains without examining the individual mineral surfaces; therefore, certain added textures or shapes may hinder or prevent a true determination of hardness.

The scale is based on ten minerals that are very readily available and basically the minerals are compared to determine which of them is the hardest. The hardness of a material is then measured according to the scale to find the hardest material or the softest material that can scratch the given material. The Mohs scale is as follows:

What is the Mohs scale for?

The Mohs scale is basically a table that serves to determine the hardness of minerals by classifying them according to physical characteristics, specifically by the hardness they present. By means of it we can classify and make measurements of the difficulty that has a certain mineral to be scratched or to suffer any type of alteration in its structure, taking into account, that it is not the same thing that to break this material.

The relative value of the hardness of one mineral can be calculated when compared to another, whose hardness is known. This way of measuring minerals was made by Mohs in a very simple way which continues to apply today, always following certain rules. It must be remembered that in order to determine the hardness of the mineral must relate the same with the resistance it has to be scratched or not.

Mohs hardness is a very simple comparative test, but at the same time, it is a little inaccurate. Perhaps its simplicity, it has become the most widely used hardness test.

Despite its simplicity and lack of precision, the Mohs scale is very relevant to geologists who use it to identify minerals using zero kits. The hardness of the Mohs scale of minerals can commonly be found in reference sheets.

Since the Mohs scale was developed in 1812, other tests have been invented to measure mineral hardness. These tests include, for example, the Brinell, Knoop, Rockwell, Shore and Vickers tests. Each of these tests uses a small “penetrator” that is applied to the material with a carefully measured amount of force. Then, the size or depth of the sign and the amount of force used are used to calculate the hardness value.

Although these tests are quite different from the Mohs test, there is some correlation between them.

Some examples of the Mohs scale are the following: 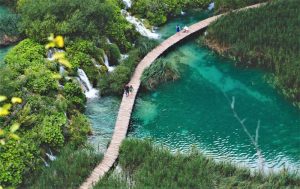